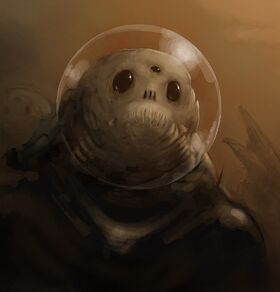 That something was seriously wrong with Gutlax was immediately apparent when he dropped out of the vat and his body started to gelatinize. Luckily, there was an old Miner atmospheric suit nearby to prevent Gutlax from decomposing completely. Still, his disease was a blessing in disguise as his home vat was infected by joobunks that could not suck onto his watery body. The only survivor from the entire brood and regarded as the lowest scum by the rest of the Unliving society, Gutlax had to live along lachtos - and even those Unliving outcasts regarded him as inferior. Falling to the bottom of the underclass meant a harsh lonely unlife on the outskirts of civilization. The dark streets of Min'Ora resonated for decades with sad "gluuruuu" growled by Gutlax's muddy vocal cords.

Shattered by his lonesome existence, Gutlax finded refuge in his love for vertiglyph painting. Street after street was covered with his beautiful art and the whole city started to notice his talent. Many copycats were spawn, the most famous of them being Krlecch, but none of them could match Gutlax's sheer brilliance. One day, his shabby home was visited by Mimpire, who offered Gutlax work in Jamamba's household.

Gutlax could not praise his new home enough. For the first time in his unlife, others treated him as equal. He even became a favorite of the powerful Jamamba, who gave Gutlax a better hard suit equipped with speech convertor that facilitated his communication with others. Gutlax would happily give in to his disease and turn into jelly - if it so pleased his beloved Zomb master.