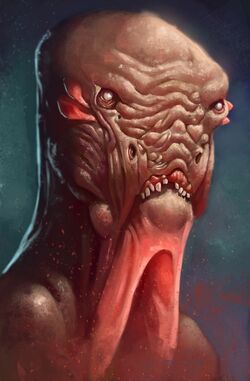 Erdha - a fierce Voor notorious for his escape from Goa'Kach. Snipers from commando 3-LAMAE have shortened his illegal parole to mere 3 Tu.
(Coraabia Artist: PumpkinPie)

Goa'Kach is the biggest and best secured prison on Coraab. This heavily fortified penal complex comprises many penitentiaries, correctional institutions and labor camps.

Goa'Kach can contain as much as 150,000 inmates. Its cells are capable of holding almost all races that live on Coraab. The complex is located between the C'Orian Sectors 25 and 26. It is composed of sixteen individual objects and a self-contained infrastructure.

The construction of Goa'Kach began in 3872 Tu on the order of protector Serrendeo. The chairman of the Circle Council decided to build it for a simple reason - to prepare for a potentional influx of prisoners that would result from a civil war connected to the war with Redds (the so-called The Three Years War). Since this worry turned out to be moot, the complex remained for the longest time half-empty - the costs of erecting xennic cells, detention halls and an intricate defense system were way over budget and it seemed that the half-constructed Goa'Kach would have to be sold to the private sector. An unexpected help comes from the neighbouring world Traxol in 3950 Tu, when the two planetary governments agreed that their worst convicts will serve they sentences in Goa'Kach together. Goa'Kach has been officially in a full working order since 4099 Tu. Traxolian magravs full of serious criminals started to land on Coraab in 4161 Tu, when the deal was confirmed again by Hermes. 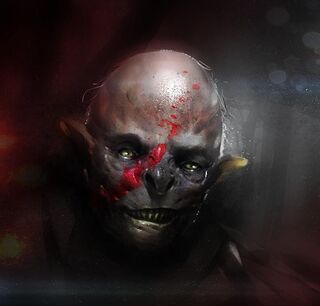 The worst criminals on Coraab are incarcerated in ULTIMO. Here they serve sentences so long they basically just wait for their own death.
(Coraabia Artist: Tonatiuh Ocampo)
Retrieved from "https://coraabia.fandom.com/wiki/Goa%27Kach?oldid=8454"
Categories: