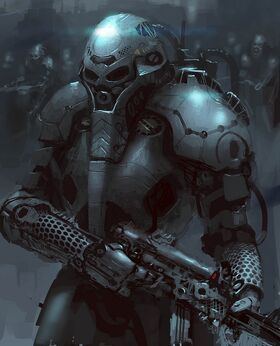 Born as an outcome of an intensive (though short) romance of a diplomatic trainee Rentra-Wa and ligan law protector Dogont, Geuta-Wa involuntarily joined ranks of children brought up by single mothers. As a child, while he travelled with his mother across the Cosmopolitan worlds, he gradually built up a strong ambivalent relationship with his father. However, he cannot resist the existence of Dogont's genes for long. He graduates at the Boga-Bu military academy with excellent results and gets subsequently accepted into the Spec-Gan forces. The young Mograt always prefers to solve critical situations in peace instead of hastily pulling the trigger, a trait much appreciated by his seniors. Geuta-Wa thus soon becomes commander of metropolitan armoured special forces.

While working for Spec-Gan, Geuta-Wa meet a Riia named Decuma Una. That time he used his father's famous name hoping that his intercession might help with his long-awaited admision to the Liga. Despite Decuma's contempt of Mogras, they become true comrades in arms. Geuta-Wa keeps hoping that she can change Decuma's racist opinions before the Riia reveals the truth that Geuta-Wa hardly knows his father.

Despite his fruitful life, Dogont never abandoned his illegitimate son and secretly watched his life-journey from distance. It was him, who financed son's military academy studies. He also ordered manufacture of a prototype of a protective mecha-armor for the Spec-Gan units and arranged that his son was chosen to test it. On the other hand - he denied him the acceptance into the Liga, as he knew that Geuta-Wa would refuse such offer, dishonouring his name in the process.