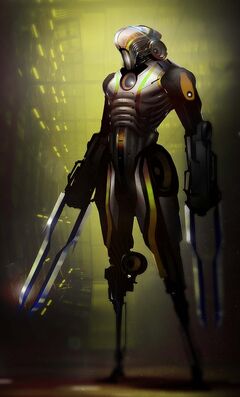 Cratoa Lumme's life was never easy. He was born as the only child of aging parents, who were already at peace with the fact that they will die without having any offspring. Due to the advanced age of the mother, a rather weak child was born and the doctors predicted him a low chance of survival. Despite that, young Cratoa grew up to adulthood and even though he possesed a rickety body, he decided to become a member of the planetary police of Khalfass. His parents, however, did not want to hear a single word about that. For this reason, Cratoa left Khalfass in 4245 Tu and turned to his uncle on Agan, who worked as a civilian administrator in Liga. Thanks to his help, Cratoa got a place on the DaruDar academy, where he received high quality education and where many Uns spent in training with extensive weapons strengthened his physical condition.

Cratoa did not have many friends on the academy. It was here, where he received the defamatory nickname Gapeg (Crip), which pointed out his physical disadvantages. Gapeg got to know Dukor, who advised him to not be afraid to proudly face his handicaps. Gapeg remembered this lesson and ordered an exoskelet with a large sign GAPEG on the back. This act increased his self-confidence.

Thanks to his excellent results, Gapeg became a member of ligan Týmu 4, on request of the legendary Wert himself. During his first mission on Rad'Zaak, he ended up in an unexpected encounter with cucaanish secret service, in which Gapeg lost both legs. He survived only thanks to Dukor's timely assistance, who was by chance operating in the same Xenozone area. Gapeg learned to walk on prosthetic legs and continues in his ligan career.