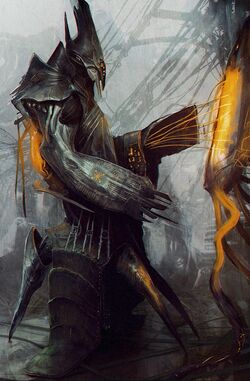 Also named B'Wraa (The Builder). Similarly to Radiokarbon and Zombolt, Ganree belonged to the ancient Zomb House Gwah (The Longliving). According to old stories, Ganree already emerged from his ree paralyzed - his sensomorotic apparatus was simply too damaged. The shell was dug out of extreme deep and centuries of planetary forces impact took its toll. It was one of the reasons Ganree never shrink again. He was one of the few great Zombs in Coraab's history that unlived in one continuous cycle. Ganree earned his fame with imposing knowledge of technology, that helped the anti-atomo alliance once and for all end Zomboss' reign.

Ganree's custom exoskeleton literally put the old Zomb on his feet. Until then, he had to be carried in protective capsule and he communicated with his servants only through tech-enhanced telepathy - each of his servants had a chip implanted in skull to relay Ganree's orders. It is said that producing the first working prototype of his mobilizing exoskeleton took two whole centuries.

Ganree brought the Unliving culure to an era of peak technological development, his machines and production processes were used for long time even after the Atomo genocide. Min-logs state, that Ganree managed to put several Pthar qanus into operation. Unfortunately, he took many mysteries to the Dump after his death. In -422 Tu his uatta suddenly ended due to systematic collapse of his overworked organism.