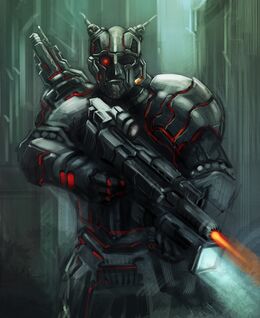 Fi-Dan - thanks to the emitters of accelerated phase, this kop is able to overcome a distance of one hundred meters in mere two seconds. The only drawback is a high energy consumption of the device.
(Coraabia Artist: Venkat Vasa)

Full name - G'Har Fi-Dan. His ambitions were always high. Fidan knew very well that the Star pilgrims-as his race is often called-can get ahead on Coraab. Their unique way of phase-moving can be effectively applied in the police force or army. G'Har briefly tried his luck at InCorps but he was suspended due to disputes with his superiors. It greatly damaged his ego so he decided to keep working on his education. He gained much experience during his eight-year stint with the Planetary kops where he worked alongside Numax. G'Har excels in a wide variety of combat but also technical skills - his hobby is construction of self-produced rifles. One series of the model BVKK-7 had even been ordered by the army sniper unit.

Fi-Dan switched to firearms after an incident with his compact PowerArm during his time at IC when he inadvertently scattered half of the Sector marketplace in an effort to stop a vendor-cannibal fleeing with bodily remains which the vendor wanted to sell in the black market. The kop accidentally killed fourteen beings and thirty-seven of them got injured.

G'Har Fi-Dan's ability of accelerated phase allows him to reach the rooftops of tall buildings within few seconds, where he then covers a wide perimeter by deploying several automated rifles. In a direct confrontation in an unfamiliar or confined area, however, this strategy dramatically loses its effectiveness.