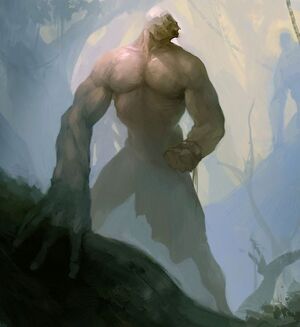 Annorian giants are the last living members of the Erta race - an ancient tribe, which appeared on Annor long before the folk of the White Eyes could ever consider itself as a civilization. Their settlements can be found deep in the forest valleys of Erra-Nurai. Even though they are one of the oldest anthropomorphic races in Coraabia, the Ertoshos rely on their traditional way of life and remain suspicious and mistrustful to the other races. The Baians have tried to win the annorian giants and their land to their side for several times already, but their efforts always ended up in vain. The giants worship Nu'Pataai, one of the powerful Nu beings, which is said to have created all life on Annor very long ago. They build monumental relics in his name, which are supposed to remind them of their patron's majesty.

The craftsmanship of the Ertoshos is legendary. Their mistrust prevents any large-scale export of their products to the other worlds of Coraabia. The right to trade on their land is given only to a select few from the ranks of Annoreans and thus their art-pieces rarely leave the Xenozone. Xot has no value for the Ertoshos - they trade usually in natural goods. Most of the time, it is moiruuk flesh and naginata skins.

Ertoshos have an interesting relationship with so called annorian dragons. Xagos visit their relics time to time and seek refuge inside of them. The main reason is safety from the xenohunters. Those rarely dare to even cross the borderline of Erra-Nurai. The several meters tall piles of crushed xenohunter bones are usually a sufficient warning.