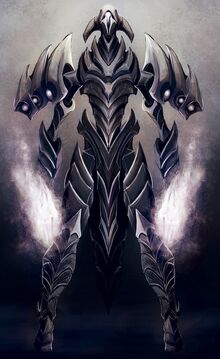 Originaly called Enoda Barat, Enodath served in 4256 Tu as high commander of troian Prefect Tok-Nel. It was him who, during tragic mycoisation of Meugo, succesfully coordinated rescue operations and evacuation of survivors from Cosmopolitan worlds. Without Enodath's command, the casualties would be far greater, as the unflexible Agan government failed to manage the situation. After he was pulled into corrupt trial process instead of being honored for his actions (he was even threatened with inprisonment), he began to despise the central prefecture. Ekhro even got into several conflicts with the Liga and thwarted few operations in Val-Mag. To this day, Enodath is one of the greatest supporters and the most vocal members of troian separatists.

In 4263 Tu Enodath met with liganor Donner in Agada. They discussed many issues and Kot-Agan Sub-journal states that the negotiations were a success. For the first time Donner admitted Liga's many failures during mycoisation of Meugo. What is equally important, calls for Mogra-Troi's independence were heard publicly for the first time.

Enodath is seriously ill and troians must be ready for the time he'll leave for ever. Experts fear that his death might cause dangerous revolts, as only his authority keeps the society under controll. In recent Tu, Enodath doesn't apper in public and prefers seclusion where he works on his memoirs - the writing is expected to reveal many backroom practices.