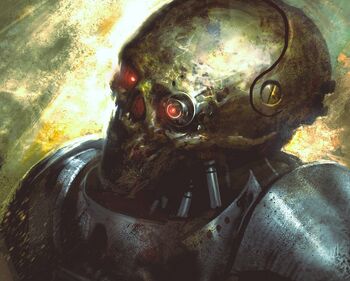 Eng-Lar is perceived as a kind-hearted joker in his departmentt - he does not hesitate to alter the voice output of his speaking synthesiser to mimic the voices of celebrities for the fun of his colleagues.
(Coraabia Artist: Johann Bodin)

Eng-lar got awakened prematurely during his birth thanks to a strong magnetic field fluctuation, which resonated in many sensitive Bael bones in 4199 Tu. His safe-keepers managed to put Eng-lar back to the coma state almost immediately, but this could not prevent all the damage. His neural ganglion got intertwined and did not keep up with the overall body growth that followed soon afterwards. Because of this accident, Eng-lar's movement was rather limited, leaving partial kyborgization of his skeletal body as the only option. This was approved by his brothers only with significant distaste. The mechanical peripheries were attached to his body without any complications, especially thanks to the amount of care that Eng-lar received from one of his safe-keepers. Mo-Nič later becomes Eng-Lar's life partner and the bone-breaking ritual went very well despite Bael's handicap.

Thanks to the intervention of the unions, Eng-Lar became an S.V.N.Z. investigator and Centropolis filled itself with gossip that he is but a mere figure of large corporations, paying for his expensive kyborgization by spying on the government apparatus. Despite this, Eng-Lar is one of the most conscientious workers with a great talent for realistic situation evaluation.

There is a secret that Eng-Lar keeps to himself - even his life-partner does not know the real reason, why the number of his kyborgized peripheries keep growing. After he comes home with a new prothetic arm, he claims that he needs it for more effective manupulation with his own body. In reality, his path to full kyborgization has a reason - Eng-Lar is sponsored by the technological concern KUGG, which uses him to test their new technologies.