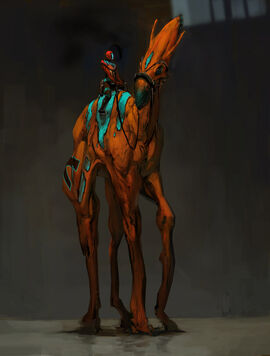 In his free time, Emoto is doing all he can to get the youth off the streets by organising sport- and knowledge-based competitions. The children like to participate and look forward to see Emoto at the end of each Light. The main price is a short ride on Nixxi – the only nwa'ir on all of Coraab.
(Coraabia Artist: Edgar Cardona)

Emoto's rich father often embarked on business trips to the Xenozone and one day he decided to take his son with him. After arrival on Khalfass, the local natives showed them a difficult birth of a lonely female of the precious nwa'ir species. Since the youngster instantly fell in love with the saved nwa'ir, his father bribed the natives to accept Emoto as a nwa'ir adept. Emoto managed to establish a strong connection with the creature, which later transferred some of the nwa'ir's abilities on its rider. Once Nixxi (as Emoto named it) ceased to consume the motherly jelly, they both returned to Coraab. Once he reached adultery, Emoto decided to study on the c'orish police academy. As an evidence of good Coraab-Khalfass relations, the young kop was assigned to his unit together with his exotic animal.

Emoto's classmates soon denounced him as a protectionist, with subtle miner girl Smujaka speaking most strictly against him. They despised each other from the very beginning, but their competing against each other soon got them among the best students of the academy. During their year-long work practice they worked as a great team and Smujaka - which found placement in 3-LAMAE - put in a good word for Emoto so he could become her sektor colleague.

Emoto soon became liked by the citizens of the centropolis, since he is capable of identifying problems before they even happenned. Cruising the streets on Nixxi's back, he was sufficiently terrifying to assure peace and order by his mere presence. One day, his animal companion is fatally wounded by an enraged miiwort radical. In the last moment, Emotos father came to the scene and paid for the costly treatment, which saved the dying nwai'r.