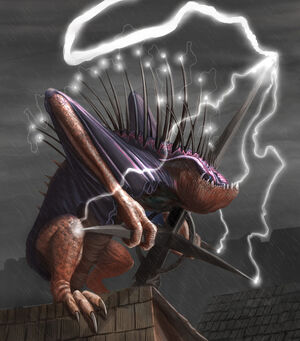 There are nearly two hundreds of different electrophilic organisms on Forneek - mostly bacteria and lower organisms, but there are also exceptions. (Coraabia Artist: David Melvin)

In 4026 Tu, several rich Annorian families embarked on a hunt for agroruuks on the planet Forneek. They were however caught off-guard by a season of strong storms. Fortunately, the foreigners possessed spacious tents covered with an outer isolation layer, which offered protection even against strong lightning charges cruising the atmosphere of Forneek over long distances thanks to the omnipresent electrophilic micro-organisms. One night, the tranquil sleep of the Annorian elite was disturbed by loud stomping on the tent roof accompanied by abrupt screeching, which overshadowed even the strongest thunders. When the awakened sleepers peeked out of the tent, their sights rester on a scary massive being. It was curling around one of their lightning rods as if it was cuddling with it. The witnesses claiedm that "The eyes of the beast were glowing, lightnings were jumping across its spinal thorns and its wing membranes kept changing colors as a rainbow."

The following expeditions to the surrounding areas were futile. Annorian hunters humbly asked for help from the local Zhoo tribesmen, who offered them a curious answer: "Without a storm, there is no Elo-pthecus." The Zhoo brought them several small reptiles from the depths of the gassy swamps, which showed an uncommon affection to electricity. The connection between these small creatures with the unknown monster remains a mystery.

Real scientific research later shows that these beings are actually electrophages, feeding on the electric voltage radiated by the ground micro-organisms on Forneek. In their mating season, the newt females move to water which carries greater charge and causes their dramatic growth. A similar fate affects all newts hit by a lightning - such electronewts can then grow to truly monstrous dimensions.