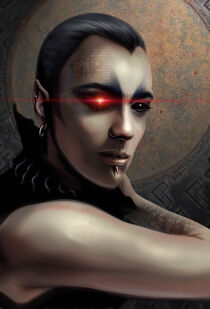 The enigmatic kop Eezar Ohan - also called Rudook - belongs to the favoured weirdos of his department. His extravagant clothing, plethora of metaligrans on his skin, adjusted bio-botic eyes, all that draws the attention to him. Eazar enjoys that very much, especially when the attention comes from his female colleagues. Unfortunately, his visage also tends to get him into regular conflicts with his superiors, who have already several times threatened him with a dismissal, in case he will not start to represent the district appropriately. The main reason why they have not done so - yet - are his excellent work results and a large pool of contacts that he has in various underground subcultures of the centropolis. Some of Eezar Ohan's colleagues like to speculate that he also surely belonged to this layer of the coraabian society in the past.

Disinformation, gossip and urban legends gradually envelop Eezar Ohan like a most extravagant suit. The exhibitionist kop relishes in this and supports such speculations with his manners. Some cannot stand him for this, but most of the department is impressed by Eazar. Even he is sometimes marvelling at the imagination of his colleagues, who keep spreading everything but the truth.

Eezar's closes friends know that the kop has no secrets, is not part of any government experiment nor he is a mysterious super-being living under a secret identity. Even though Eezar did grow up in a street gang - which taught him to conduct like a self-assured dandy, in his heart he always had the need to protect all that he considers right. Today, from the position of a planetary kop he can protect the street-youth to make sure they get the same chance as he did.