The name comes from the word dungtha (to hit). 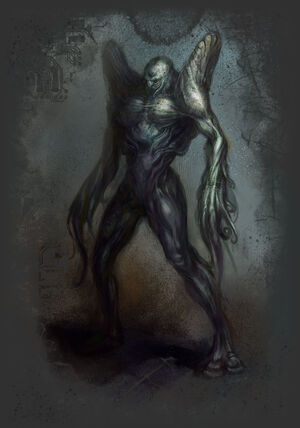 Dungs are the largest Unliving tribe of so-called Vatters. They are a complex ethnicity with a lot of subspecies.

Dung's language is a simplified dialect of the ''Coraabish'' language - ''Dung Umpa''.

Dungs appeared during the Period of the Middle Dump, along with most of the other Unliving tribes. Their ethnics continuously appear throughout all significant historical events. Dungs are under direct rule of Zombs since the ancient times. Zombs use(Analogicka poznamka predchozi.) them during the building of the city Mino or during their conquests throughout whole Coraab, and in many other cases. A part of Dungs joined Zomboss during the Period of Unliving States. They helped him to conquer the Ilokai Empire of the Circle, which Ilokai still blame them for.

Dungs got into difficult situation after the arrival of Miners.Thanks to their great physique structure and extreme endurance, Dungs were the best adepts for the hardest jobs in Tal colonies. Millions of Dungs never returned. The long and savage Period of Excavation caused the death of several whole subtribes (Un Dung, Pak Dung). To this day, it symbolizes only hard work and unbearable suffering.

Dungs have an exceptional physical structure. They possess considerable strength, are resistant to extreme temperature fluctuations and don't need nearly anything for their "operationality". Their disadvantage is low intellectual potential. It is obvious they were bred for the hardest dirty work.

Like other Vatters, Dungs are born in so-called reproductive vats. Almost immediately after leaving the vat, they are ready for physical labor. Dungs are one of the few Unliving tribes with non-decreasing numbers. Their population is, in fact, growing. Dungs live quite short lives - mostly between 60 and 90 years. Another of their advantages is high resistance to all kinds of vat infections like Joobung.

Dungs are best suited for work in heavy industry, public services or as arena fighters.

Dungs' favorite "sport" is the brutal Un-Nom-Pak fighting. Their performance during the brutal fights in big arenas is unequaled.