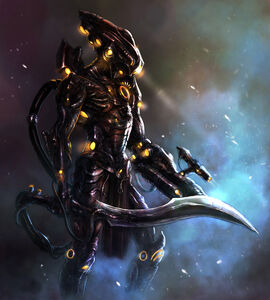 Dukor is one of the ligents - undercover ligan agents operating over Coraabia. His missions are top secret and not even other ligans know Dukor's true name. Formally, he is member of Team 4, subordinate of Wert himself. From time to time he participates on official missions under names as Bakchan, Bemel or Duro. This young ligan however spends most of his time on difficult missions at periferies of Coraabia - sometimes it takes several Tu for him to finish and come back. As he frequently alters his look and voice, not even ligans know when they are really facing him. In public, his affiliation to Liga is unknows, Dukor is usually considered to be galapka or some Sol officer.

Only a few know that Dukor once visited Coraab. His wobble was classified, not even Mawazaan himself kne who is he dealing with of Iontal. Dukor's mission was to protect Agan Xotter expedition heading to Min'Ora where they were supposed to meet with high-ranking Zaans. This made him the first Ligan in history to cross borders of the tightly guarded unliving city-state.

Only two members of Liga know details of his second mission on Coraab that took place in 4269 Tu - commander Wert and liganor Donner. Dukor's task was to capture and escort Zomb industrialistWanree to Agan. The mission failed miserably and Dukor was nearly killed. After the incident, Zombs broken all their secret ties to Agan oligarchs for good.