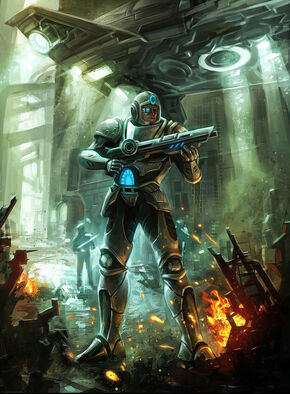 It was not until an advanced age that Dogont became a leader of the Ligan Team 2. For twenty seven years he served as an ordinary Ligan, a shining example for all the others. Incorruptible, honest, and responsible Mogra-Troiec Dogont always preferred non-violent ways of restoring order. Nowadays, many consider him the only suitable successor of Donner to the post of Liganor. He still stands in the front line as his team leaps into yet another dangerous mission; thanks to a personalized mecha-armor, his movements are still as nimble and precise as ever. He has been nicknamed the Ceramic gramps by his brothers in arms, although no one dares to call him like that in his presence.

Dogont still mourns over the passing of Kassio, for whose death he feels personally responsible. In his honor, Dogont named his second-born son Kassion. His romances with numerous paramours are legendary; this Ligan is rumoured to have over twenty extramarital children.

Ligan Dogont suffers from an advanced stage of osteocreny; when diagnosed, doctors thought he had only a few years left. Despite having the upper hand in his biggest battle for over forty years now, Dogont's career hinges on his daily inflow of range of strong analgetics.