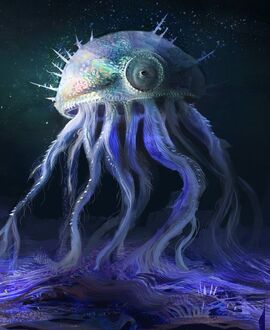 Di-zondas are a feared hoptaran predators. These meta-jellyfish let strong winds to pick them up from the ocean's surface and drift over the land until they can descend into a body of water again. While adrift, they release a vile substance that is spread over the ground. If any living creature comes to contact with it, it becomes paralyzed instantly and the substance burns the body similarly to a bio-acid. In a few Uns, the victim literally melts. Di-zonda, on a way back to the ocean, sucks the liquified remains with it's straw-like organ called kuglur. Single flock of these meta-jellyfish is capable of erradicationg whole Moiruuk herd in one drift-over.

Di-zondas are able to quickly grow to a eight times their size. Inflating and deflating using stomach gasses, they control their flight height. The meta-jellyfish is usually bell-shaped, some exceptions exist though. Xed, in his Discourse on the vital basis states, that di-zondas were rarely spoted as high as in the stratosphere.

In Hoptar's inhospitable environment, tens of thousands research colonies are armed with gigantic fans, that prevent meta-jellyfish to drift over the settlements. It would only take one hungry di-zonda above the colony to cause an unimaginable catastrophe.