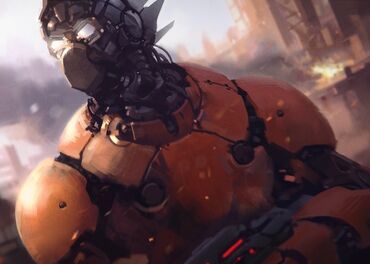 They are the perfect warriors - it is extremely difficult to face them. You can handle one easily - against ten you need to engage your whole army. -Wronko
(Coraabia Artist: Jamshed Jurabaev)

Era: the first series was built around 3905 Tu

Hardly any machine paid off to the Red Command as much as the Destro series. These bots equipped with the advanced artificial intelligence of Redda require almost zero intervention from the outside for their operations - they all sync the data collected on the battlefield in real-time and share it among themselves simultaneously. Thus, the more Destro-bots operate in a given area, the better insight they get. Each unit then operates with the best possible assessment of the situation and is therefore able to act accordingly. Altogether, there are more than ten different variations on the Destro series - from a light and mobile sniper to a heavily armored combat unit armed with two automatic anti-infantry cannons. They are preceded by their reputation of ruthless killers who do not take any prisoners on principle. The fear and terror they sow across all civilized worlds are therefore hardly ungrounded.

The Destro series was supposedly designed by armo Tiamar himself, who even wanted to sell its patent matrix for big Xot to the WaalkWak some years ago. Waks rejected the offer because "the circuit design did not allow transparent control over behavioral motivations of the machine intelligence". The technologists simply could not be sure to whom would the Destro-bots serve after their construction.

On numerous occasions, the Red Command allegedly expressed concern over the autonomy of the Destro units - all data from their operations is collected in the data matrixes controlled by Tiamar and the central mind of Redds actually lacks any access to it. It is said that Tiamar runs his own private war through Destro-bots - yet his true motivations and intentions still remain hidden to Coraabians.