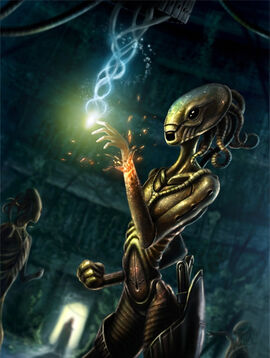 You'll break a sweat while working with her. When a Riian heats up the surrounding space, the sight is well worth it. Una lights a fire under your sac as a bonus. - Geuta-Wa
(Coraabia Artist: Bryan Marvin P. Sola)

Una was a high-powered force of nature already in her childhood. Una's father, a highly ranked Riian, always took pride in the fact his little daughter received the best education possible. The fact that Decuma was exceptionally talented was already clear during the first phase of self-armoring. Riians have the extraordinary ability to accumulate internal heat, which is then channeled out in explosive doses through perfected fighting techniques. The unique chemical composition of their bodies also makes them resistant to microwaves and high-frequency soundwaves. Young Una used all these strengths during her service at the Spec-Gan units. Her only weakness was her extremely racist worldview, a testament to the strictest kind of Riian upbringing.

Decuma Una deeply despises all Mograts and Ekhros who "dare" to inhabit the Cosmopolitan Worlds. According to the Riian doctrine, once the Blue Fire comes to deal with the universe, Riians will be the only ones surviving its scorching heat. Decuma's dream is to get out of the Spec-Gan into the esteemed Liga, but with the skinbag Donner in the charge, such transfer is out of question.

Rumors spread around the special forces HQ that Decuma Una gladly resorts to disproportionate police brutality. After the incident in the Agan prefecture Tor-Elik, where Una burned a giant transshipment terminal to the ground just because its Mograt foreman did not act respectfully enough, Decuma was immediately transferred to the xenic divisions.