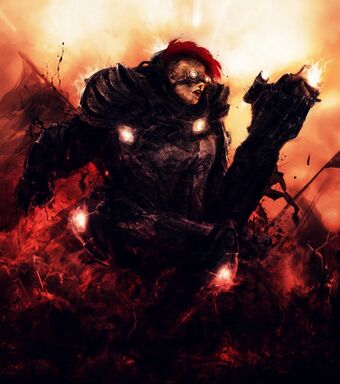 Chance brought the renowned Coraabian mercenary together with the most important contemporary elites - which later probably proved fatal for her.
(Coraabia Artist: Jakub Benešovský)

Professional mercenary Sikh is a shining example that even an originally ordinary inhabitant of a Periphery world might play an important role on the transplanetary level. Dazzil used to work in a fuel cells factory, where an armed coup broke out in 4174 Tu. Sikh quickly became a leader of the strike commitee, which brought her into the eyes of general public. She was soon contacted by recruiters from InCorps. Dazzil went through harsh special units training but secretly left Coraab just before taking up duty as she did not want anyone else to order her around. She gained extensive combat experience as a solitary mercenary; Dazzil Sikh participated in fourteen wars from which the last one proved fatal for her - a bullet fired by an enemy sniper in the Battle at Banjh-Pont ended her life in an instant.

It was Dazzil Sikh who brought her colleague Donner into Liga. Although she never had any ambitions to serve in such a big institution, she kept warm relations with many Ligans. Thanks to that, Dazzil always had her finger on the pulse of powers that be across Coraabia.

Dazzil Sikh received an offer from the very Sol Eru to accept the title Sol Sikh and join the most prestigious mercenary caste in Coraabia. She refused and thus antagonized the arrogant Sols for ever. It is said she was treacherously killed at Banjh-Pont's line of defense by of one them - by Sol Gara herself.