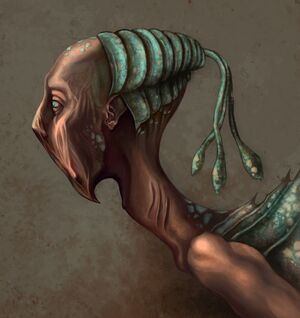 He stood over him in silence. Then the air thickened with yellow smoke. The unknowing body was instantly covered in blisters. It fell from the chair and soundlessly died. Daoko sat on his favorite spot, now finally empty. - unknown konstruquakk, 2nd class
(Coraabia Artist: Theodora Daniela Capat)

Daoko is a name which was always treated with respect in the WaalkWakian underworld. The old Or-sha is an engineer for the Sonqqqa syndicate, an organisation representing at the top of the criminal society on the complanet. His accomplices has stood in the authoritarian shadow of inconspicuous and quiet Daoko since times immemorial. In fact, there is no living contemporary who could talk about the day he joined the organisation. The syndicate transformed over time into a strict hierarchy with a refined bureaucratic apparatus, which would be readily able to effectively govern a small city. Daoko oversees the trade in interware as well as decommissioned military material and the Sonqqqa syndicate gradually stretches out its influence to practically every shoal on WaalkWak.

Daoko is mute and can only fluently intercommunicate with Soops. For communication, he uses a set of tonal bomblets with compressed gas which allow him to emulate the sign version of the Wet speech with refined movements of his hands. The bomblets allow him to color the gas to express his mood. The most fearsome color is yellow, as that one heralds anger accompanied by a strong dose of poison.

Daoko is a member of a rare genetically modified branch of amphibious Or-shas. Since his gills grew into his vocal cords, he learned to live in silence, which is reflected in his remarkable ability to stay unheard. Local konstruquakks hold him in an almost sacred fear - they still vividly remember how Daoko killed three of their colleagues who erroneously dismantled a wrecked magrav Daoko wanted to resale further.