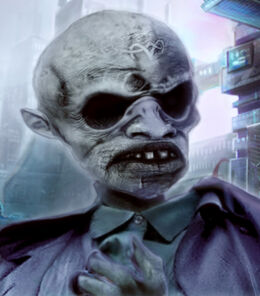 Daggy recorded by a sub-porter in Sector 8 on his way from work • 4250 Tu
(Coraabia Artist: Jakub Hussar and Natzuurjuk)

This cranky bael from Bahoofa is a mystery to almost everyone. Daggy can be sensitive and thoughtful; at other times he explodes into a fit of uncontrollable hysteria, destroying everything around him. One never knows which frame of mind this Bael is currently in, which is why Daggy has not won many friends during his long professional career. That does not mean his colleagues deny his ability to solve the cases with tenacity and efficiency. Holmes once even said that if everyone in Bahoofa was like Daggy, they would rid the centropolis of crime and then kill each other. Daggy has a whole range of deviations which are unknown even to his closest co-workers. No one is surprised when this bael does not show up for work for a month. He usually makes up for this absence by solving more cases than anyone else during the following week.

Bael Daggy is hooked on homomania, an obsessive desire for "prettying" oneself up into a fully humanoid look. To achieve this ideal, he underwent various operations like a nose and tongue implantation or gluing of artificial lips, to name a few. This way, he creates the perfect counterpoint to his colleague Mastodontha, who is obsessed with becoming a bael. Therefore, these two envy each other all the time.

Daggy is used to applying contradictory methods in the course of enforcing law, greatly perplexing all his colleagues. On one occasion, he is capable of cutting out the tongue of the questioned criminal and chewing it until the poor fellow confesses. On another occasion, he does not hesitate to send a fat Xot cheque to a boss of a criminal group, accompanied with a recommendation to hire professional bodyguards before Daggy comes for him.