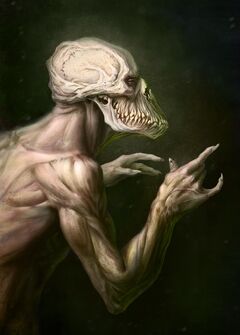 Short for Corostennian puller or nix of Corosten, this term names a subspecies of primitive Unliving, which can be found mainly in sumps and still waters found on Coraab. Though they are not difficult to deterr, they still pose a great danger for unxperienced travellers. For long it was believed that they are eating the flesh of creatures dragged under water. This is however ruled out by the newest findings. Researcher and traveller Xed proved, that they are feeding an a specific hormon combination, secreted by living intelligent beings into their blood shortly before death. The dead body itself is then left untouched, except from periods of persisting hunger. This discovery allowed extensive spraying of water surfaces with chemical substances simulating natural Corostennian food and thus minimizing attacks of the surrounding population. Last Corostenno attack on Coraab was recorded in 4241 Tu.

In majority of the Corostennian locations, the protective spray substances are made from synthetic aromatic replacements. These are not harmful to Corostennos, but also contain no nutritional values, which causes gradual extinction due to hunger. Corostennian population is thus quickly decreasing despite protests of numerous organizations. Only in remote areas are Corostennos able to survice in greater numbers.

The fanatic League for Free Unlife got famous in the past for spraying their the Corostenno waters with their own chemicals, which neutralise the effects of the original "lethal" substance. The organisation stopped soon after the local people started to shoot down their antigravs, throwing the surviving crew into the neutralised waters. In addition to renewing the attacks of Corostennos, the chemical also caused epidemics of degenerative skin infection dehoog.