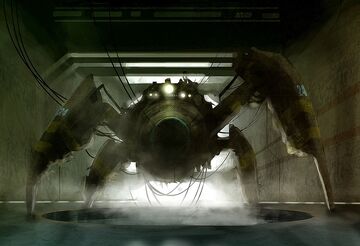 Cor-bot is without question the oldest series of mechanical law-enforcers on Coraab, which is why it is quite rare to personally meet one in C'Ora nowadays. During the centuries, the series Cor was refitted and upgraded many times. Today, there are roughly two hundred specimen of twentieth to twenty-third generations serving in the centropolis. Despite its impressive hull and decent weaponry, this bot is a shining example of the huge technological gap between Coraab and the distant WaalkWak, which has an almost unprecedented monopoly on the bot production in Coraabia. It is basically just an obsolete clumsy monstrosity that keeps a whole platoon of Corraikh boters busy, since it has to be continuously calibrated and repaired. As such, "Cory" is little more than a target of mockery in today's C'Ora.

In the past, it was common to outfit Cor-bot's weapon mounts with U'Nora-500X launchers. This changed in 3812 Tu after a hacked Cor-bot marched into a Sokurr arena and bombarded the spectator stands with a volley of these highly explosive missiles. After this incident, the deadly "500Xs" were removed from police armament altogether. Two thousand unfortunate sport lovers met their end in the debris of the Bal'Teeka Dome.

The Cor series has been continuously criticized by public and it is almost a miracle that there are still some functional models serving in the Coraabian metropolitan forces. Cor-bots were already supposed to be replaced by more advanced and reliable Supra-bots, but thanks to huge bribes and vehement lobby from the boter guild 100-son, the launch of the Supra series has been postponed by unbelievable three centuries.