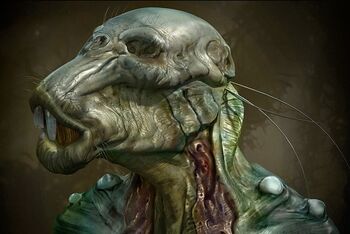 Chugomak - a legendary character of C'Orian polygons. Many urban legends and songs have been created around his fate and they still remain a part of the local colorful folklore.
(Coraabia Artist: ASela)

An infamous xenno who poisoned a myriad of creatures with his "meals" during his life on Coraab. Chugomak was virtually uncatchable for long years - he escaped the forces of law thanks to his ingenious system of ropes and ladders or well-camouflaged holes in highway polygons on which he offered his goods. Chugomak's portrait along with his detailed description made it to every tourist guide of C'Ora - this way, the authorities wanted to make sure no one would buy anything from this dangerous Orbo. Opponents of these measures argued someone should had rather focused on catching him and dragging him to the court since the mysterious Orbo always managed to get away from the law.

Chugomak never bought the Orbotoshan lizards from dealers like most of his colleagues - he was stealing them right from the nearby rendering plant. He never hesitated to sell any meal prepared from them to anyone driving by - not even the legendary soup flavored with boiled tires.

Chugomak's agility and nimble movement between the giant pylon constructions was breathtaking, however it probably also contributed to his mysterious disappearance. It was not until several years later during a routine check of gel circuits at the base of polygon 14|92 that someone's remains were found - Chugomak probably fell down during one of his aerial escapades. Thus he was never punished for his crimes.