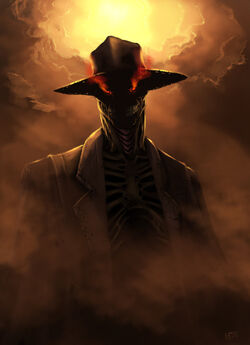 Called Olth'Outha (Perifery's Shadow) by the Unliving. Chud is a Ilokai shrouded in mystery. Only rarely he appears in scarcely settled regions of wastelands around the great cities. Usually, it is in the early Haze Day, when Coraab is covered in maelstrom of raging chemostorms. He usually brings various trinkets and artifacts to the civilisation, trying to trade it in for weapons and supplies with the locals. Chud is known for his impulsiveness, it is not rare that his bargaining turns into bloodshed. Some Unliving would rather never meet or trade with him and are actively trying to avoid him. Rumor has it, that he doesn't even find the Dumpers' relics, he simply robs poorly guarded Dumpdigger caravans.

Chud's characteristic burning eyes are told to be just an illusion, simple luminiscent implants. There are others that say he found some powerful technology in the wastelands, long lost relic of hyperadvanced cultures, that is slowly turning him into a demigod. Truth is far more prosaic - Chud is suffering from rare disease, so called sonokrechia, that will blind him one day.

Despite government's ban, Chud built an estate in deserted Tal colony of E-Tal. He was was ambushed by hungry Hypomores or nomad Dung raiders several times, always fighting them off. Chud is obsessed with searching for legendary Pthar artifacts, reputedy hidden in the Perifery. Iblort knows if he'll ever find one.