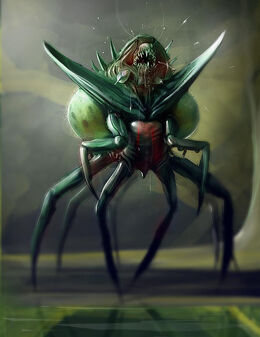 Chogols are one of the most dangerous species of the diverse ymefian fauna. These meta-crustaceans are equipped with two pairs of etching glands found in their mouths, which can be used to spur a high-precision stream of 9-KUUL bio-acid over a range of many dozens of meters. The acid is strong enough to cause fatal injuries even to creatures far bigger and superior to chogols themselves. They are merciless predators, feeding mostly on small creatures, but occassionally - given the opportunity - also on certain ruuks. Chogols are one of very few species capable of eating sairuuk flesh. In the past, trained chogols were often used in brutal tribe wars. However, the sophisticated training method to prepare these meta-crustaceans for combat is nowdays lost to the ymefian society.

Chogol stores the bio-acid in a pair of resistant sacs. People of the Mong tribe believe that there is no greater challenge than to tear one of these sacs apart and survive. This difficult act is thus important part of the local adulthood test. Even though no natural enemy of this species exists on Ymef, relatively short life span and inclination to degenarative illnesses keeps chogol population stable for thousands of Tu.

Pure 9-KUUL bio-acid has enormous price on the black market. Chogol hunting is thus widespread despite the strict ban issued by the officials of the local Atta-Oko race. Bio-acid expeditions usually end up tragically, though. For this reason, findings of dozens of etched bodies of inexperienced adventures are a common sight on Ymef.