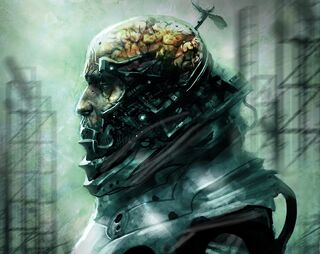 Armo Cefal holds the position of the commanding InCorps officer for artificial intelligence. This division tends to all matters regarding bots and intelligent programs - their development, administration and elimination. Cefal is also responsible for overseeing the L.O.P.P. unit, the second largest boter guild on Coraab, which is in the direct control of the planetary government. Despite his boter past, Cefal never possesed excellent knowledge or abilities that would predetermine him for the armo position. Situation changed after an experimental brain operation, which dramatically increased the miner technologoist's intelectual potential and thanks to which he gained his current nickname. Cefal undewent the operation thanks to a complex net of family contancts leading all the way to the intergalactic himself.

Some InCorps officers gave Cefal an uncomplimentary nickname The skin of Hermes. Especially armos Tubon and Gul Betar have a big dispute with him. They consider him a third category officer, who was lucky enough to be in the right time on the right place. Despite massive neural enhancements, Cefal suffers from frequent memory loss to this day, including epilepsy and somnabulism.

Cefal's opportunity to step out of the intergalaktiks shadow came in the form of Aggak's revolutionary attempt, which was hoping to end Hermes's autocratic regime. Cefal joined the ranks of the protesters, but his initial enthusiasm left him very soon. When he realised that Aggak's chances to make any change in InCorps were rapidly decreasing, he obediently returned to the loyalists. It was for this reason why Hermes left him in his position after his return.