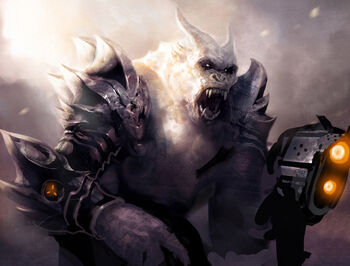 Annh Calephar's tyranny over Annor raises negative emotions to this day. His Tuonn half-breed, named after the master, is one of the infamous symbols of the authoritarian regime. Caleph was hand-picked by master breeders from the quality litter of Tuonn wrestlers and later underwent complex genotherapy. He was then gifted to the Annh Calephar, famous for his wrestler species breeding. Master grew fond of his new pet and took him literally everywhere. Caleph even participated on political meetings, a psychological move of Annh Calephar to ensure more respect. Not once did Caleph rip an offender apart as an example for the others.

Thanks to his uprising, Caleph was highly intelligent and even learned to use sign language. Annh Calephar then needed only one gesture to give precise orders to his pet. Annor's ruler granted many rights to his pet, some even borderly absurd. Caleph became a commander of the guard, once even a priest and ceremoniary.

Noone knows when did this privileged Tuonn turn away from his master. One is for sure - it was him who, in fit of blinding rage, mauled Annor's ruler and scattered his remains all over the palace chambers. Annorid guards quickly killed Caleph, but Annor didn' really grieve its ruler's death.