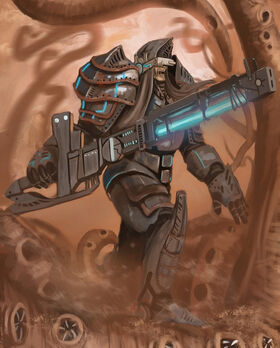 A trusted retainer of his liege lord Ibar Sigor, the founder of the ancient House of Ibar. In the old times of Qu-Puic Empire of the Seven Saint Worlds, it was Caj who led Sigor's troops into the battle against the alleged infidels inhabiting the surrounding worlds. Even though Caj Qan was honest and loyal, the Emperor-Prophet Quagh Puo rewarded him for his contributions only with words of shame and utter contempt. The reason was the mad imperator's ultimate hatred towards the nations of Ekhros and Mograts, who waged a war against him for years. At the sunset of his tyranny, Quagh even had the mercenary sergeant major Qan imprisoned and tortured. It is said that it was at this exact moment when the Emperor-Prophet lost the last remnants of allegiance Ibar Sigor had for him. Caj Qan lived to see another day of freedom, had his good name restored and led the famous academy Psi-Pu-Xan on Qu-Puo until the end of his life.

Among the mercenaries of the Sol caste, Caj Qan's vast autobiography Seven Wars is regarded as one of the pillars of generally accepted dogma. The sergeant major Caj stood head and shoulders above his contemporaries, for he possessed peerlessly progressive thinking and humane attitudes that have been a source of inspiration up to this day. Caj Qan was one of the lucky few who took part in all the most important struggles for the Seven Saint Worlds over the years and still managed to survive against all odds.

Caj always made every effort to choose a strategy that would keep casualties to the minimum. During the defense of the Ro-Gupt Citadel in 1003 Tu, he did not regret the effort to employ satellite projectors and few cheap audiovisual tricks to evoke the feeling that a large relief force of Sigor's guardsmen rushed from the mountains to help. A thousand men strong enemy army surrendered to Caj Qan's fifty-five men without firing a single shot.