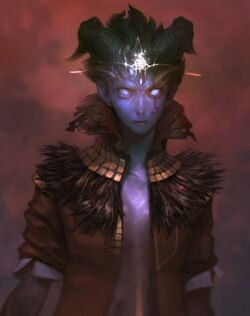 Briia Pawa grew up in the poor streets of Lirmar - orphaned during centropolis' strato-bombardment in the last conflict with Qu-puo corate. Briia earned the living by weaving traditional Bolgan cloth made of Bekhezon fur. As an adult, she left the cloth-making job and blinded by patriotism joined the army. It was during the era of Bol-Gard - in 4245 Bolga was seized by radical fundamentalists. The new government saw great potential in her and the story of poor Bag-Demagin orphan, that lost all and everything to Qu-Puoan agression, yet was willing to risk her life for the nation. In |4249 Pawa rises to be the youngest Armo of Bolgan military forces' in history.

Young Armo is soon blinded by the rise in power and loses track of what is right. In Lirmar, she starts illegal trade with Ruuk breeds and then, when competition tries to push her out of the market, doesn't hesitate to send militia forces to execute them without trial. Qu-Puoan miority meets the same fate after revolting against her in the great cities.