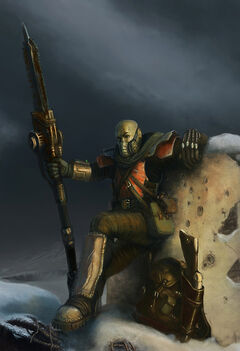 Legends tend to stick in memories of intelligent beings on Coraab. Myths of heroes, outlaws, but also of those who prevailed over the Dump. It is said that the ancient dumpdiggers had a sixth sense for finding hidden treasures. They could feel the otherwordly smell of Dumpers' artifacts hidden thousands of bols underground and they were able to reveal unexplored Dump caverns just by feeling the disharmony of the vibrating scraposphere. This all holds true for the most famous Ilokaj dumpdigger of today, Bodo Kox, whose star shines like the fiery corona of Unaar. One of the few dumpdiggers on Coraab who still rely on intuition, Kox only uses detection devices to confirm his initial assumptions. Apart from short stops in big cities to sell his findings, Bodo Kox can only be found exploring the inhospitable areas of the Rusty Dunes.

Bodo Kox started his career in a luxury antigrav factory. As an artificial intelligence enthusiast, he became the right hand of the mighty industrialist Zaan Tessar. Through his vast collection, the old Zomb initiated him into the secrets of ancient Dumpers' artifacts. Bodo eventually left the walls of the factory - and Tessar would never forgive him this "treason".

Right in the beginning of his dumpdigging career, Bodo Kox made several ground-breaking discoveries, raising to the surface more than two dozen magrav wreckages from the Dumpers' era. This Ilokaj specializes in huge interstellar ships from very pragmatic reasons - the sale of the T'ung matter is a profitable business, which not only financially secures his future expeditions but also allows him to purchase other artifacts on the haze market.