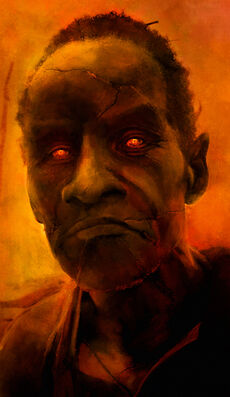 When Tu'Rokarr seized the central Sectors during the Talish Trihaze and started with controlled killing of xennos, the stagnating c'orish society was not ready for such a wave of agression and violence. Despite that, nobody rose to actively stand against the agression. In 3437 Tu, an Ilokaj with a strange zomb name established a movement, which is known as Nu'Okha (Interconnected Beings) today. Its members believed that it was the right moment to settle debts with the miners for all the previous grievances. During one of the demonstrations, a hundred-thousand strong mob formed, supported by Nu'Okha headed by Bocheezai. He did not hesitate to order siege of central Sectors of C'Ory on his own - in the moment of blockade breach and the encounter of both forces, the Baels stroke and how it ended up - is now known to everyone on Coraab.

The unliving contra-revolutionary managed to gather around himself the tribe elite including many influential Zombs. Those supported Bocheezai until the time, when they learned from skelethor Dunuuo that Baels are planning to push trough the idea of complete destruction of the city center together with all the warring parties. As a reaction, Zombs silently pulled back from their positions within a Light and left their ilokaj allies to their fate.

In the moment of the seventh ban-bomb explosion, Bocheezai disintegrated together with all the Nu'Okha members. This is why there is a saying on Coraab, which goes: Khe ik'katta (Wait for the seventh!). The death of the charismatic Ilokaj was revered as an iconic act of martyrdom even during the rise of the Skeletate. Nowdays, this coraabian hero (originally a common corabit melter) is considered as a symbol of courage and active resistance against pressure not only by his own tribe.