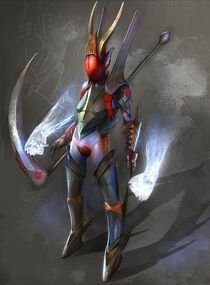 Don't look into her eyes - unless you wish to taste the power of her cloaca. - Emoto
(Coraabia Artist: Stephen Mabee)

Birrdyn Emrysh joined the S.I.T.A. (Society for Investigation of Transcentropolitan Affairs) as a young ambitious ornitofelist trained in a brand new method of police work. Thanks to her special gear, Birrdyn is able to launch herself to the height of many dozens of meters, hitting the assigned targets from the air while gliding or freefalling down. Her specialisation is arresting of suspects with diplomatic immunity, who tend to hide behind the walls of well-protected embassies.

During the recent tragic accident of Chaalk matter tanker in Sector 11, Birrdyn was personally assigned with extracting a powerful Annorian chaalkobaron from the wreck of the ship. Even though she was only able to evacuate the man with great difficulty, he forced her to return two more times to the burning hell - once for his business documents and second time for a decorative sillicon brooch.

According to guesswork of some nu-bloggers, the young policewoman's stylized costume is a compensation for a childhood complex, when her younger brother choked on a feathered birdpossum. When a minor tabloid Provincial Scars printed these allegations, its chief editor promptly received a stink-bomb in a box of birdpossum feed.