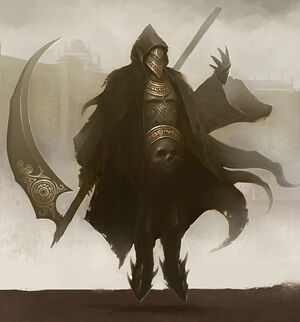 Bejerek Shoka - a rare archaic illustration. Later on, he used to be displayed with a revealed face and a pile of criminals' chopped off heads in front of him. • 680 Tu
(Coraabia Artist: Hrvoje Beslic)

To this day, besmirchers and defamers have been claiming that no Bejerek Shoka has ever existed - while others would bet their unlives that there were more of them. If we stick to the official line, Bejerek Shoka was something between a judge and an executioner of the high society in the ancient city of Mino; an autonomous body that settled disputes and carried out sentences as well. For his deeds, Bejerek was answering to one authority only - The Great Minoan Lodge. Bejerek publicly executed all offenders with his ceremonial corabit scythe on one of the smaller public squares which still carries his family name (Takhta'Shoka, Shoka Square) today. He stayed on duty till the death of Min'Orian lord Zombog and the subsequent occupation of the city-state by the Miners.

Some say that Bejerek sparked more fear among the patrician population than the Minoan Lodge itself. In certain scientific circles, the idea that the name Bejerek Shoka meant nothing else than Berrekh Sok - the Council of the Righteous - and that it served as a label for an institution with tens of elective members is still very much alive.

Other contemporary sources state that after "old Og" died, Bejerek was interned in a Tal colony X-Tal, where he worked for a few years as a petty taskmaster. Shortly afterwards, he was killed, allegedly on an order from local Zombs who held the Minoan Unliving in the utmost contempt. The actual truth about mysterious Bejerek might never be fully uncovered; it seems certain that not even a single direct witness capable of confirming his existence remains on Coraab.