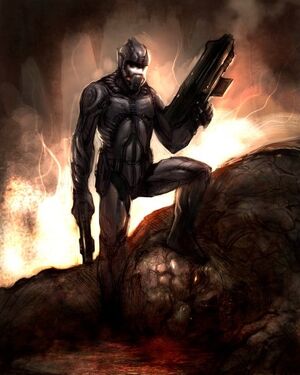 Born Indutha-Ro. This well-known bounty hunter traveled through countless worlds, where he hunted down his fair share of criminals. The only problem is that with a single exception, they were all desperately small fry. Beebop was always focused on his image of interstellar cosmopolitan. His friends were Khalfassian smugglers and owners of godforsaken casinos where he regularly lost his earned Xot. His long list of arrested petty thieves of third and fourth-rate category in the vein of flesh-eating butterflies poachers or smugglers of Traxolian pukebugs always caused amusement rather than respect among his colleagues. Beebop eventually packed this unsatisfying career up and enlisted in Khalfassian military intelligence, where he serves till today. He gained new skills and experience there and one could say that his life finally turned around.

Beebop's only triumph was the arrest of a serial killer Slemeshek. Unfortunately, due to a sub-attack on a police database, the infected system erased all zeros from the reward in his file because it considered them redundant. Beebop received a grand total of two Xot for disposing of this dangerous xenno.

Beebop has a rare concentration disorder, due to which he cannot focus on one thing for more than three seconds. Because of the fact his central brain vein would burst before he could precisely aim on a target, he, little by little, restructured his armory which is now filled solely with fully automatically aiming weapons.