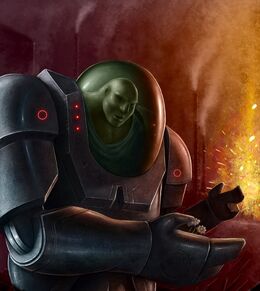 Dubbed by many the 'Pretton scrapbaron' . Forger inherited a small domain from his ancestors, which he in his boundless arrogance and insatiable desire for power ravaged and plundered. Right at the moment he came to power, Baron signed an enormously lucrative contract with the industrial consortium Zen'Ga through which he ceded control over local habitable planets. Without hesitation, the corporation built huge docks on both worlds. From that point onward, its magravs ceaselessly dumped imported trash from other developed worlds right into the star in the middle of the system. In dozens of Tu, Pretto turned into one huge environmental disaster. Of course, by that time Forger already dissappeared along with all the money he made from the "deal of the century".

Because of the colossal and intentionally perpetrated catastrophe on Pretto, the Cosmopolitan Worlds soon offered a great bounty on the head of Baron Forger. However, the treacherous Demag managed to hide himself on a peripheral world - Coraab turned out to be a perfect hideout for the rest of his long life. The responsible bodies still lament the fact they failed to bring him to justice.

Baron Forger tried to act as a law-abiding citizen of Coraab. He assumed a fake identity (mainly using the name Chavok) and donated significant amounts of money to Orbital University, where he also regularly organized huge charity events. It is said he secretly wanted to turn the entire Coraabian University into the biggest xenobrothel around. Luckily, this plan never came to fruition.