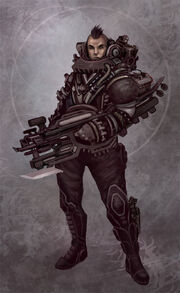 One of the founders of the Bai'Ala organisation. As a son of the famous media magnate Donk Monorok, Bark was given elite education and training. He passed the famous Mograt military academy DaruDar and was preparing for his career in the army, yet his father would rather see him as a successor to his private information empire. Into the growing family schism comes tragic news - Bark's biological mother died during the tragic mycosation of the world Meugo in 4231 Tu. What mostly enraged Bark was the pasivity with which the central world Agan tackled the tragedy - especially since most of the victims were Mogra-Troics and Meugos. Together with his former fellow students from DaruDar, Monorok was gradually forming a separatist movement which strived for secession from the Agan dominion for good.

Initially, the purpose of the newly founded Bai'Ala was to set up a planetary blockade to demonstrate the independence of Mogra Troi on Agan goods. However, extremists like Pom Karr quickly spearheaded the movement to launching brutal attacks on local Agan elites. Bark Monorok left Bai'Ala in 4235 Tu and began to search for his fortune in distant parts of Coraabia.

Bark shortly operated in the Sol caste as Sol Mork. For several years, Bark was looking for quality interware for Sol boters at the local black market on CuCaan and was dealing with weapons and ruuks in the city of CuCca. In the course of smuggling one of the contrabands, he got into a fight with members of the Garen-Ghmut union, during which his good friend Sol Neth died. Monorok returned home to his father and begged him for forgiveness.