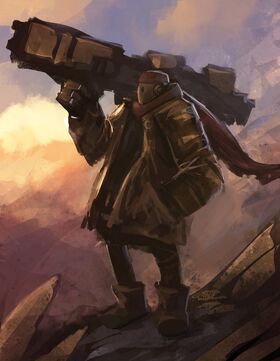 Potha'Pol 3 is a very expensive weapon, used primarily by InCorps elite forces. If fully charged, it is capable of disabling even a military Qu-bot.
(Coraabia Artist: Steve Hamilton)

Botohunters are very popular on Coraab, especially because of their discretion and affordable pricing policies. This is also underlined by high fines and bureaucratic bullying in cases where government Derobotization units are called. The uufthakan hunter Baloo is one of the most popular hunters, since he usually hands the lost bots to their owners in functional state. Baloo works very carefully as well as very quickly. The only problem occurring during his work relate to his uufthakan origin. Due to racial stereotypes, it often happens that many customers consider him to be a mercenary thug, who does not mind some extra dirty work. Baloo politely declines every single time, explaining that he whole-heartily avoids any kind of violence. As he tends to say: "When the oil is running on the floor, it does not hurt anyone".

Baloo takes two things on every hunt: specially adjusted military model of Potha'Pol 3, a massive weapon emitting EMP pulses and a hand-woven shawl from one of his daughters. Baloo is a proud father, who takes care of not only his four own children, but also seven adopted ones. He is usually called daddy-bot among the Uufthakans, perhaps for the reason that he is able to provide for such a numerous family.

Baloo is a fair hunter, who always gives the targets a chance. He sends a signal to the hunted bots telling them that he is on their trail and asks them to surrender. When he is forced by Tengo from the Zapraskal's gang to hunt down a living victim, he could not afford such luxury. He tried to excuse the act by providing the tied Ugze with a resonation knife. The captive dislocated his arm to free himself and thanks to Baloo, he managed to escape.