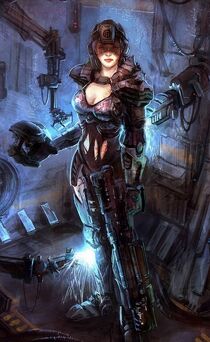 She gave me shivers every time I saw her. You won't meet many chicks here at HONK. I sweat like a bektezon during each visit of her workshop. - Spangle
(Coraabia Artist: Zhou Peng)

Rannah Bada started her career as a technologist of a third degree at centropolitan district of Sector 12, where she spent the best years of her life alongside her buddies Knecht and Ajaarpa. Fate brought her to Sector 4 eventually, where she was charged with management of the whole local department of sub-boters. However, Bada soon began to get bored in the office and asked for degradation. Surprisingly enough, this pretty lady always felt best in the workshop with some honest manual labor. She learned machining with a laser multi-counter, delved into advanced nanotechnology, programmed gel circuits of her toys, all as though as if it was something natural like breathing. The whole district was soon using her modified equipment and all kinds of useful gadgets. Bada earned a flattering nickname among her Miner colleagues: Tal Nachta (Lady Technology).

After years of friendship, Bada married Kurro who served with her in Sector 4. Her parents never got over the fact that Kurro was not a Miner but 'merely an Ekhro wetback'. Among general public, a marriage between Miners and other humanoid cultures - no matter how closely related - is perceived as a sign of moral decay.

Kurro threw some punches at Ajaarpa in front of his wife's eyes at one of the intrasector banquets. He then wrote in his report that Ajaarpa poured a glass of B'Tang gin in his face. According to witnesses though, Ajaarpa just likely succumbed to the merry atmosphere and uttered a peppery remark about his previous relationship with Bada, which really ruffled Kurro's feathers.