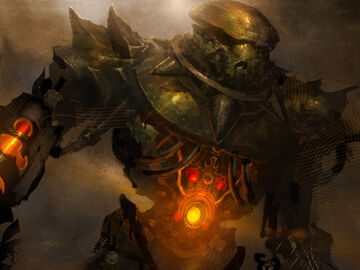 We often recognized his mood from the coloring of the lights he glowed with. Blue always meant trouble. -unknown Ilokaj • 766 Tu
(Coraabia Artist: Johann Bodin)

Some historical annals state that it was the first time when a man-machine led the whole army into a war. Azatoth was given the commanding role by Drugar the Pusser himself during the time he was leading the armies against the Atomic Empire, which was held in thrall of mighty Zomboss. Soldiers under Azatoth's command achieved brilliant results. Azatoth, as a cyborg covered in an invincible corabit armor, led his men from the front lines. He mocked Atomeeks before their eyes because back then they had no weapons that could pierce or anyhow damage his battlesuit. Some say that one morning, he conquered an enemy base before his own soldiers even marched out of the camp. Azatoth was immensely cruel to his subordinates, achieving their absolute obedience.

Zomboss was annoyed with Azatoth for a long time and he did not know what to do with him. A stroke of luck helped him at last. During one of Azatoth's many campaigns behind the enemy lines, he fell through the ground into a several hundreds of meters deep hole full of magma and melted down before any help reached him. They say that his modulated scream was heard from the deep for many long days.

Azatoth was one of the few cyborgs that existed on Coraab back then. He kept only the top half of his previous body in order to put on the armor some legs capable of holding the entire armored construction. It is still not known who was actually hidden in Azatoth's armor. Some speculate about his possible extraplanetary origin.