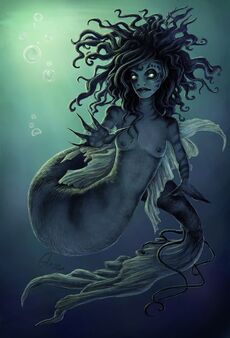 Wearing any clothes causes a significant breach of etiquette among Anandos, which might even lead to an expulsion from their society.
(Coraabia Artist: Emma Weakley)

Practically since the founding of the palaces of Annorian Lords, the fluvial Anandos had their honorable place there. These shy creatures occupy extensive aquariums, which resemble harems thanks to their dimensions and characteristics - only females, or eunuchs catering to their needs, might be placed into the palatial water tanks. The Anandos accommodate their masters' pleasure mostly with their beautiful singing, which induces delightful meditative trances. However, it is strictly forbidden to touch them in any way; those audacious enough to establish a body contact with Anandos can be punished with death. There is also an unwritten habit stating that none of the Anandos are allowed to ever cross the borders of Annor, otherwise the millenial empire would cease to exist. Thus these lovely creatures cannot be found in any of the renowned xennoparks of Coraabia.

Anandos have a very sensitive hearing and in the case of an intrusion of unwelcomed persons into the palace, they emit high-frequency sounds which alarm the whole building in a moment. Years ago, Coraabian merchants approached Annor with an offer of purchasing several Anandos for purpose of doing business in security alarms – all they got from the administration was scorn and accusations of deriding Annorian traditions.

Anandos have perfect voice memory and in the course of their short life, they never sing the same meditative song again. Their vocal range and specific timbre cannot be interpreted by any other known creature. Although synthetically created sub-logs can be found on the black market, most of the time, they are just cheap and deficient fakes of the original.