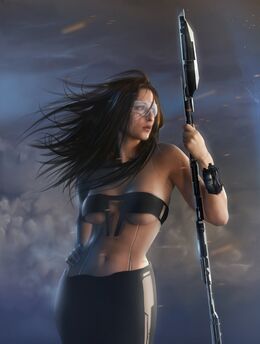 Amara received kind care from her step-parents on Annor and lived a happy childhood in comfort and wealth of a noble family. Her native Khalfass is still too much of a lure, though.
(Coraabia Artist: Amir Salehi)

Amara was born on Khalfass but ended up on Annor soon after her birth when her own mother rejected her. Here she got entrusted into the care of adoptive parents who belonged to the highest ranks of the local society but were unable to have their own children. Amara had a happy childhood, surrounded not only by her thought-to-be parents, but also by numerous servants. She lived in comfort and was raised with unmatched support of the adoptive family, receiving outstanding education only appropriate to her elite social background. Her teachers noticed her "warrior" genes and when the time was right, she was allowed by her adoptive father to participate in military training.

Amara's adoptive parents are distant relatives of Annh Durai, the current ruler of Annor himself. The wise Durai soon became fond of the girl and agreed with her assignment to his personal elite guard. Shortly before the end of her training and after her endless requests, Amara was allowed to leave Annor. The reason was triggered by a meeting that changed her life forever.

Amara then once again meets Scara Varga - a woman which she felt passionate about ever since she had seen her on Annor for the first time. Both women engaged in a secret lesbian relationship. Later on, Amara learned that their Khalfassan mothers knew each other very well. Thanks to Scara, she found her mother and started to meet with her regularly. During one of the visits of Khalfass, Amara's mother revealed to her that her friend, Garama Varga, had three more children aside from Scara.