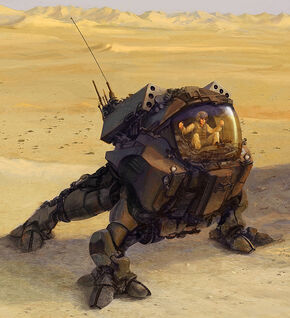 Also nicknamed as Jumper or Bubble. Aikonur was developed by Ligan scientists tasked with a specific assignment – to create an autonomous mobile unit for transportation of individuals and small operating teams over difficult terrain and areas not reachable by air. The main focus was thus on development of Aikonur's motoric apparatus and overall environmental adaptability. This machine is capable of traversing rocks, bodies of water and after certain modifications, even quicksands and magma fields. Even though it is equipped with two thermionic missile launchers and a pair sub-power laser cannons, these weapons are rather symbolic in modern warfare and thus Aikonur's main role remains transportation. Jumper is constructed out of specially-shaped titanium alloys, which make it very hard to hit and even harder to destroy.

Aikonur is also equipped with a spherical module, which envelops the whole cockpit and its crew and gave the machine one of its nicknames. In emergency situations, this "bubble" can be ejected into planet's atmosphere. Thanks to special Wak technology, this module is lighter than air, allowing it to safely float up to the edge of free space. There, the crew can be safely extracted by the mothership.

Aikonurs were at first used exclusively by the Liga, but several series were later sold by ligan command to friendly worlds as a gesture of alliance. Coraab currently owns seven of these machines, which are mostly used by local law enforcement units. Due to its many advantages, illegal variants and copies of Aikonur appeared on the black market soon after its introduction. These are very popular among leaders of authocratic regimes around the universe.