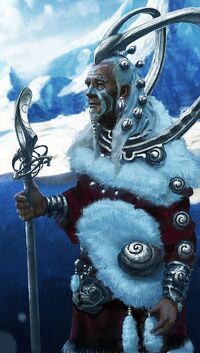 A respected Agan scientist, thinker and a co-founder of the G.O.P. government research institute, Ahoud was exhibiting exceptional intelligence throughout his entire life. His colleagues loved him for his positive attitude and empathy. He was also a truly enlightened pacifist, always trying to resolve things rationally and without being overly emotional. Energetics and evolutionary anomalies were his main research fields, with his intensive research in the latter rewarded with a honorary Xot diploma from the DaruDar academy. During his life, the G.O.P. was an island of independent research and technological advancement. Snorgal was always able to find the necessary resources, either from the WaalkWak government or private corporations.

His secret dealings with the Ri-Das armos can be considered one of the few shady sides of his life. For a decent sum of money, Snorgal supplied them with chemicals that could be used for the production of deadly biological weapons. Thankfully, the dangerous substances have never been used. Defending his actions, he argued that he invested the resources into the fight against degenerative diseases.

Ahoud died of natural causes at the respectable age of 125 Tu. His adopted charge, Sonar, nevertheless still believes that specific groups from the academic circles were involved in his demise. Allegedly, Snorgal was on the brink of a revolutionary discovery that would change the understanding of bio-genesis. His work, however, remained unfinished and the logs documenting his last research have never been found.