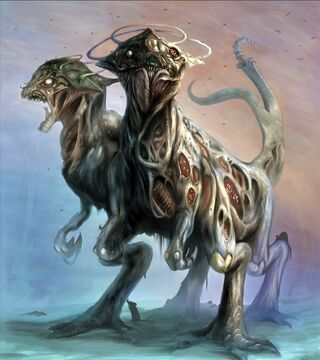 Also known as Anna-Pam (Twinsaur). Agroruuk is a feared and undisputed king of Forneekan fauna, a tireless predator who feeds itself solely on other ruuks. At full growth, it can reach fifteen metres in height and its skin reinforced by bio-silicone can easily withstand powerful impacts, fire and a majority of acids. Agroruuk can be killed only with highly penetrating weapons or a perfectly coordinated air strike. Since Forneek is a favorite resort of cream of Annorian society, mass twinsaur hunts called annapammui are periodically organized on the planet. For whole days, groups of aristocrats armed to the teeth chase these majestic creatures. As a result, the last centuries have seen this imposing titan of Xenno world degraded to a role of a mere spectacular adrenaline attraction for rich upstarts.

Agroruuk feeds mostly on wild sairuuks and can comfortably eat as much as ten of them every day. Its hunting strategy is clear - enter their ruukery with a mighty leap, trample the frightened ruuks and deadly harm as many of them as possible with its sideattacking twin heads. The feast may begin shortly afterwards. Agroruuk is one of the few chosen creatures in Xennozone capable of digesting the flesh of sairuuk.

Both agroruuk's heads telepathically communicate with each other thanks to its head rings which double up as some sort of "bio-emitters". A twinsaur can thus perfectly coordinate both halves of its body. Cases have been recorded in which more agroruuks communicated with each other at the same time. Annorian scientists even tried to experimentally implant a head into a different body - and the connection worked again.