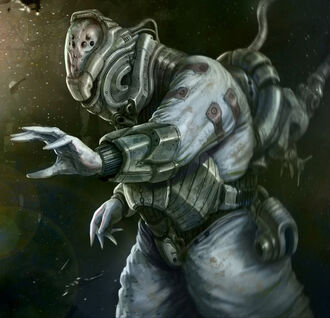 Nooga Squad was a legend among all aglomeros. Their loss deeply shook with the remaining members of the institution.
(Coraabia Artist: Maxim Verehin)

Aglomeros units have clear focus - to fight spatially enormous violators in densely populated areas. The main tenet of their training speaks clearly: it is paramount to pacify the perpetrator while minimizing the damage to public property and civilian lives. Aglomeros encounter wide variety of problems during their missions - whether it is a taran who fled from a xennopark, a colossal mecha-droid with hacked brain or a giant gelatinous entity feeding on vormit, the aglomeros must always keep their composure in all situations. Their equipment is specifically designed for combat in the streets of the most populated Sectors; they are usually equipped with a wide variety of non-lethal weapons such as microwave cannons, paralyzing webs or tranquilizer guns.

Individual units of aglomeros compete among themselves in a long-running contest for facing the biggest adversary in the streets of C'Ora. They even have their own sub-net channel broadcasting their interventions as recorded by the police cameras. The current leader is Qybak Squad, which was forced to encircle and destroy a six hundred meters (!) long carnivorous worm in 4014 Tu.

Nevertheless, the biggest catch is in fact missing both from the official bulletin board as well as the sub-net - years ago in Sector 11, Nooga Squad met a rare elastic gastropod that was able to stretch its body over an area of almost one square kilometer. Sadly, its body vapors dissolved the entire unit immediately upon its arrival. The gastropod was annihilated only thanks to the power of a military satellite equipped with powerful thermolaser.