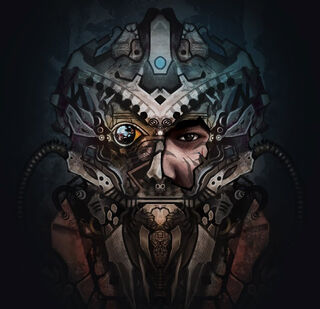 Man'Su comes from a traditional miner family, which derives its origin from Mo Tarha, who was the legendary pilot of the first miners' magrav to land on Coraab. Already in his 16 Tu, Man'Su was accepted to the elite military academy Bol'Karaa, where he became a student of the former C.P.F head armo Wronko. Thanks to his exceptional agrava combat flying skills, he was given a nickname - Aggak, which means "agravian" in coraabish. Wronko's sudden death made him an eternal hero in Aggak's eyes, whose legacy he decided to follow. For a time, he served as an armo of the skelletal Bahoofa units and due to his many successes, he managed to become the head armo of the C.P.F. In this position he repeatedly gets into conflict with intergalactic Hermes, whom he criticizes for his undoubtable position with the same enthusiasm as his former teacher.

During his studies, Aggak gained reputation of an unshakable (some would say even utopist) moralist, who believes that good exists in every being. Although fully occupied by his work for the C.P.F, Baels who he met in Bahoofa during his previous assignment remain his favourites. His reputable military command skills are in big contrast with his ruselessness (naivity), thanks to which he repeatedly looses significant sums of money to crooks.

Beloved by everyone, Aggak soon became uncomfortable for intergalactic Hermes, whos position of power he criticized quite often. Tubon - Hermes' puppet, is ordered to murder the popular armo, but fails in doing so. The attempt is recorded by a certain Humpitch! sub-porter, who then makes the case public and raises a wave of unrest. Hermes declines the charges and labels the case as sub-journal drivel. The public opinion remains on Aggak's side, though.