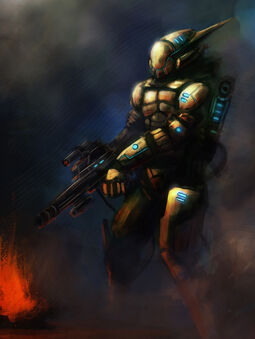 "Lubro or Zmuchlan?" is even a name of a game popular among little Miners. Unless the captured agent confesses, other kids will soak him in a puddle of mazut or cover him in rusty mud.
(Coraabia Artist: Travis Wright)

The infamous security agency Zmuchlan was once founded by splitting from its parent company Lubro, which sparked a state of permanent hostilities between these two organizations. While Lubros are fully specialized in the art of sabotage and industrial espionage, Zmuchlans act as auxiliary units of Coraabish police force. Their comparative advantage lies in high mobility and vast knowledge of local bureaucracy, which often allows them to arrive at the crime scene well before the actual policemen. Agents from Zmuchlan pass virtually the same training as planetary policemen while enjoying significantly higher salaries - the benefit of working in the private sector. On the other hand, the government has not granted them any actual competencies and they are authorized to use only non-lethal weapons.

Zmuchlan agents often present themselves in public as the government agents Lubro to earn more respect. Conversely, Lubros often pretend to be Zmuchlans in escalated situations, especially when they want to wash their hands of previous failures. Unsurprisingly, police officers treat both agencies as a couple and jovially call them Zmubro.

Some say the agencies never actually split up and still secretly form a single apparatus. The whole situation is so unclear on the outside that no one can support this allegation with any facts. Another rumor has it that Zmuchlan has been mired in red numbers ever since the inflow of generous government subsidies dried up and is therefore on the brink of liquidation. Nobody knows whether the parent agency will buy it back eventually.